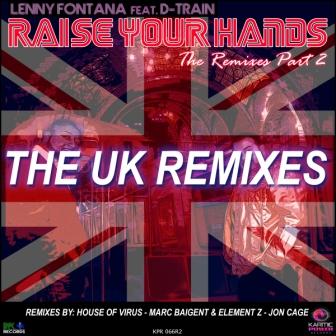 Most UK soulsters have a soft spot for JAMES D TRAIN WILLIAMS and though in recent years his profile might have dipped just a little, the big voiced Brooklyn born James has been working steadily. He’s in demand for sessions (his CV features work with people like Bette Midler, Mary J Blige, Elton John, Vanessa Williams, the late Natalie Cole and did you know he even worked with Luther on ‘Dance With My Father’?) and he also works the lucrative jingle circuit (another link with dear Luther).

Much more recently James has teamed up with top US house producer LENNY FONTANA and right at the end of 2015 the pair put out ‘Raise Your Hands’ which filled floors right over the festive season. The tune’s now available in some fresh remixes…. from Jon Cage, the House Of Virus and Marc Baignet… which though big on beats still allow James’ booming voice to shine through. Clearly our man’s lost none of the power and passion that won us over on stuff like ‘You’re The One For Me’.

The single’s released on Mr. Fontana’s Karmic Power Records and you can learn much more @ www.karmic-power-records.com