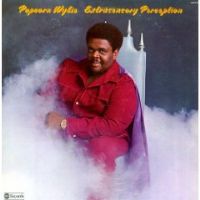 Chicago’s redoubtable DUSTY GROOVE store has just issued a couple of wonderful archive albums on their very own label…. First up is the hugely collectable ‘Extrasensory Perception’ from the late RICHARD POPCORN WYLIE. The 1974 ABC LP was the legendary Detroiter’s only full solo album and has been out of circulation for far too long. All the songs on it are collaborations with (in various combinations) LAMONT DOZIER, McKINLEY MITCHELL and BARNEY PERKINS, while the players include DENNIS COFFEY, MELVIN RAGIN, RAY PARKER Jr., JAMES GADSON, JAMES JAMERSON and ERNIE WATTS. The second “groovy” goodie is a soul-jazz classic from BROTHER JACK McDUFF … ‘Gin And Orange’. The 8 tracker was originally issued on Cadet in 1969 and captures the organist at the top of his game with a band that included GENE BARGE, CASH McCALL and PHIL UPCHURCH. For more details go to www.dustygroove.com …. Full reviews on www.soulandjazzandfunk.com very soon.