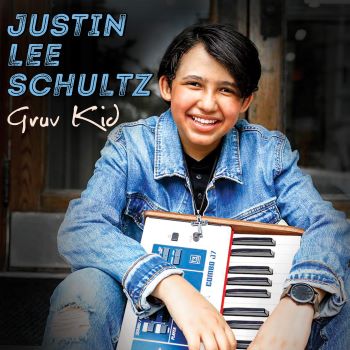 For some time now we’ve been hearing a lot about a young multi-instrumentalist – JUSTIN LEE SCHULTZ. Born in Johannesburg, South Africa and now based in Durham, North Carolina, the 13 year old has been winning high praise from some big music biz names, None bigger than Quincy Jones who recently opined: “This kid is something special”. Robert Glasper is of the same opinion: “Justin is an older man in a little boy’s body!! It’s so great to see somebody so young have such a vast love of ALL kinds of music!! And to see his work ethic and his drive is so inspiring! He sounds amazing and he’s only getting better!”

We got our first proper taste of what young Justin could do via the early September single, ‘Just In’ – one classy and (surprisingly?) mature slice of contemporary smooth jazz. It served as a tasty hors d’oeuvre for the album, ‘Gruv Kid’ which has just won release on Shanachie Records and it’s no surprise that the 11 tracker is stuffed with plenty more of the same slick, catchy smooth jazz grooves which allow  young Master S to show off his consummate skills on piano, guitar, bass guitar and talk box.

Such is Justin’s standing in the jazz community already that he can call on some big names to work with him. So, on the single ‘Just In’, Gerald Albright and Pieces of a Dream helped out. Indeed the “Dream team” are on hand throughout the album (they’re the producers!) but amongst the other “names” here are Jonathan Butler who features on ‘Over S.A’, Najee who can be heard on the opening ‘African Chant’ and the “godfather of smooth jazz keys”, Bob James. James is there on young Justin’s cover of his classic ‘Taxi’ theme tune, ‘Angela’. The LP’s other big cover is Stevie’s ‘Do I Do’ which is given a brash, snappy makeover with Justin clearly having a ball on talkbox.

The majority of the tunes though are originals – most penned by Justin in tandem with his father Julius who also plays bass on the album. Keeping it in the family, big sister Jamie-Leigh is the album’s drummer. A family affair? For sure and though this set may well be filed under “smooth jazz”, in places (like that ambitious ‘Do I Do’) the sound is far from “smooth”. Justin says: “Music brings me joy because I can express myself when I play. I can also get creative when I’m improvising” … and you can hear that joy in each and every cut on ‘Gruv Kid’.