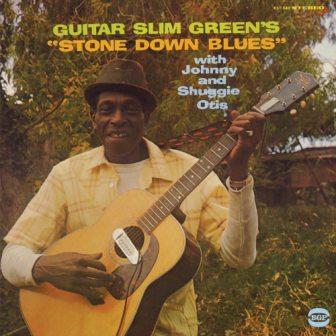 Blues man SLIM GREEN made just a few recordings in what was a long career. Born Norman G Green in Texas in 1920, Slim eventually settled in Los Angeles in the 40s where, in 1948, he made his first record. Ten years later he reappeared in a group called the Cats From Fresno who made a couple of records for Johnny Otis’ Dig label.

R&B/R&R pioneer Otis was to play a further part in Green’s career when in 1970 he had the bluesman record an album for the Kent label. Titled ‘Stone Down Blues’ the set was a basic yet effective blues collection featuring a simple trio format…. Green on guitar and vocals, Johnny Otis on drums and his son Shuggie on bass.

The album – much sought after by blues collectors – has long been out of print but has just won reissue via Ace Records’ BGP subsidiary. The LP was a 10 tracker and all the songs are original’s. Sonically it’s compelling electric blues but Green constantly shows his rural roots. For this reissue BGP have added two “bonus” tracks…. ‘My Marie’ and ‘Rock The Nation. Both were recorded at the same time as the LP but were never released.

GUITAR SLIM GREEN’S ‘STONE DOWN BLUES’ IS OUT NOW ON BGP RECORDS.