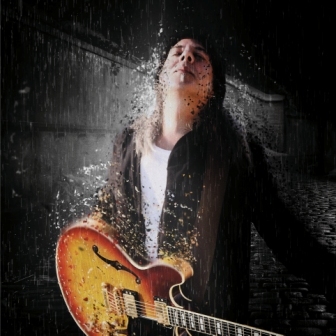 If you think Greek music begins and ends with people like Demis Roussos and Nana Mouskouri, think again! Think VASSILIS “BLUE” SOTIRIOU! Born in 1966, Vassilis learned to play guitar at an early age and it became his passion. After military service he worked with the Blue Rose Band before striking out on his own, debuting on disc with 2013’s ‘Reach The Skies’ – and album of blues and jazz.

Mr S has just released his second solo set … ‘Live Your Life’ and it comes highly recommended from this quarter. You see, unlike the guitarist’s previous album, it’s neither blues nor jazz and you’d never believe it was recorded in Greece (no disrespect to our Greek cousins, by the way). If somebody told you that the 9 tracker was recorded and produced in a US urban centre, you wouldn’t argue! That’s evident form the opener – the album’s title track. If you came across this “blind” you’d be forgiven for thinking you’d stumbled across a new Will Downing cut. Yes, ‘Live Your Life’ is that good. Right on the cusp of smooth jazz and sophisticated soul, it features a great vocal from Robert Finney Snr. Don’t know anything about him, save he has a fine, soulful set of pipes which he uses again on the biographical ‘Music Is My Word’… more Downing flavours.

Amongst the other featured vocalists is a lady called Raja Nee. She features on three of the songs, of which ‘I Need’ is quite superb; its arrangement and brass fills reminding me of those great old Curtom classics! It also boasts a lovely piano break. Odd, maybe, when you think the the album’s marquee name is a guitarist. Vassilis is gracious enough to let his musical associates share the limelight. His big guitar moment comes on the Latin romp that is ‘This Is Love” Here the clear reference point is Santana. Another noteworthy track is the closer, ‘Family’ Semi-spoken and reflective, it might make your recall Tupac’s ‘Family Tree’.

You’ve probably gleaned by now that this is a varied set … it is and each of the nine tracks has considerable soul merit. Little wonder that stations like Starpoint are rotating plenty of the tunes. Like I said, you’d never believe that ‘Live Your Life’s’ provenance is Greek. Investigation highly recommended … especially the track ‘I Need’.