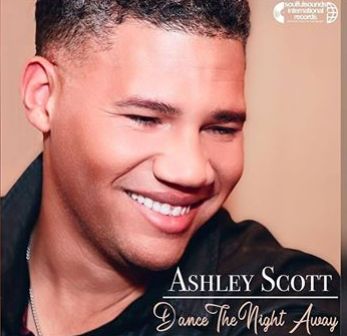 ‘DANCE THE NIGHT AWAY’ is the new single (his second actually) from new(ish) US soul man ASHLEY SCOTT. He has a great pedigree – he’s the nephew of the Three Degrees’ Helen Scott and he studied at Howard University under tutors like Grady Tate and Webster Lewis! He was also a member of the famed Howard University Gospel Choir and since graduating, he’s shared stages with people like Jean Carn, Vivian Green, Bilal, Marcus Johnson and Take 6. Right now young Ashley works with Will Downing (he’s on his business team).

His first single was 2016’s ‘Words’ –a pleading ballad that prompted a certain Frank McComb to tweet; “Ashley Scott….a brother who’s spirit and friendship is just as genuine as the “Words” in his song.” .

You can probably guess from the title that ‘Dance The Night Away’ isn’t a ballad. However, it’s not frantic; rather, it’s a stately and sedate affair that will appeal to the sophisticated soulsters and the steppers circuit. The production and arrangement remind me of those great old Lou Rawls’ classics, though Ashley sounds nothing like that maestro. He has a charm all his own…. and the tune is quite lovely. I believe it will be commercially available from next week…. you’d be a fool to miss it!