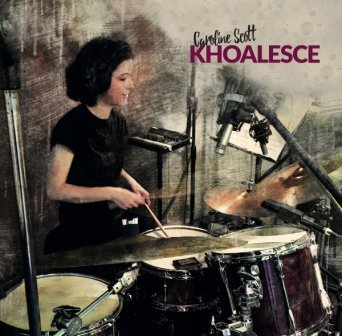 Don’t know too many female drummers in any genre- never mid jazz, but it looks like rising sticks-woman CAROLINE SCOTT might be amongst the first to challenge the status quo. Her influences growing up ranged from Bill Evans through Stravinsky and on to Radiohead but a masters degree in jazz set out a defined career path for her.

Sadly in 2017 Ms Scott underwent open heart surgery and her growing career (plenty of sessions and live performances with top ensembles) was put on hold. However the enforced break did give her the opportunity to write music and the result of those efforts is about to win release as the 11 track long players that is ‘Khoalesce’ which hits the sales racks in November.

She says: “The music is subject to controlling atmospheres and moods that have influenced my creative process. Circumstances and emotions clearly shine through”. Make up your own mind… Caroline Scott’s ‘Khoalesce’ is released via www.khoalesce.com on November 9th.