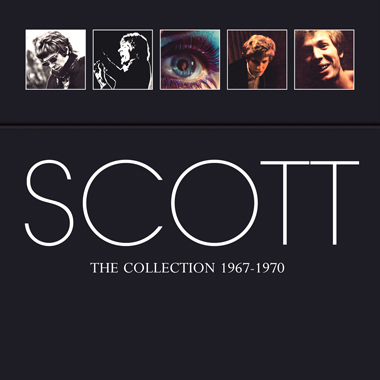 SCOTT WALKER isn’t everyone’s idea of a blue-eyed soulster, but there’s no denying there’s a real soulful undertow informing most of his work. Indeed his breakthrough group, THE WALKER BROTHERS, rose to fame on the back of a series of well crafted soul covers including JERRY BUTLER’S ‘Make It Easy On Your Self’ and WALTER JACKSON’S ‘My Ship Is Coming In’.

SCOTT WALKER went solo in 1967 and via a quartet of albums – simply titled ‘Scott 1, 2 , 3 and 4’ – he forged a reputation as one of the world’s foremost yet most enigmatic crooners. The albums featured complex WALKER originals, his sincere takes on the songs of JACQUES BREL and well-chosen covers like ‘When Joanna Loved Me’, ‘What Are You Doing The Rest of Your Life’ and ‘The Windows Of The World’.

Universal Records have just released a wonderful box set that collects together those first four albums along with Walker’s fifth solo album, ”Till The Band Comes In’. They underline just what a powerful yet sensitive performer WALKER, at his peak, was…. melancholy never sounded so good. It’s a wonderful collection, while the concise booklet – with notes from ROB YOUNG – goes some of the way to unravelling the complexity that was/is SCOTT WALKER.