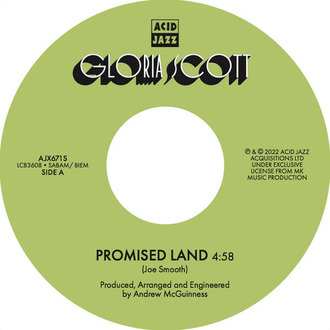 Acid Jazz Records has announced that the label has signed the veteran US soul singer, Gloria Scott, who opens her account for Eddie Piller’s iconic UK company with a stirring single called ‘Promised Land,’ a Joe Smooth-penned song that blends Scott’s gospel-soaked vocal with a throbbing, string-adorned dance groove. The single is a taster of a ten-track album called ‘So Wonderful,’ which is due in September.

Texas-born Scott, who hails from Port Arthur, was a protege of Sly Stone and led the San Francisco-based group Gloria Scott & The Tonettes in the early 1960s before joining Ike & Tina Turner’s soul revue later in the same decade as one of the Ikettes. In 1974, she joined the Casablanca label where she was mentored by Barry White, who produced her only album, ‘What Am I Gonna Do,’ which though commercially unsuccessful at the time was later championed by the UK’s rare groove scene and became much coveted by collectors.

On ‘So Wonderful,’ her first album since 1974, 76-year-old Scott worked with the noted British producer, arranger, and drummer, Andrew McGuiness, whom she first worked with at The Baltic Soul Weekender in 2009 when she sang ‘What Am I Gonna Do’ with his Baltic Soul Orchestra. Three of the cuts are versions of songs that Scott cut as demos with Barry White for a follow-up Casablanca album that was never released.

Gloria Scott’s single ‘Promised Land’ is out now via Acid Jazz Records on 7” vinyl and download. The album ‘So Wonderful’ will follow on 30th September.