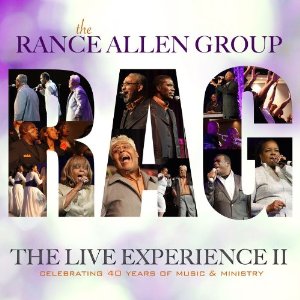 Pioneering gospel legend, RANCE ALLEN – who was the first signing to Stax’s Gospel Truth imprint in 1971 and experienced a Top 30 US R&B smash with ‘I Belong To You’ in 1979 – returns to the recording scene with a brand new album called ‘The Live Experience II: Celebrating 40 years Of Music & Ministry.’

It captures the dynamic 62-year-old Allen and his group giving an energetic performance at Greater Grace Temple in Detroit. The set comprises 15 songs and features cameo appearances from gospel legends Shirley Caesar and Vanessa Bell Armstrong alongside Paul Porter and Chris Byrd. Among the highlights is the combustible, funkafied ‘Livin’ For Jesus’ and ‘United We Stand,’ the latter an uplifting message song featuring a massive 30-voice choir.

Rance Allen’s album is out now on the Tyscot label. Go to www.tyscot.com for more info.