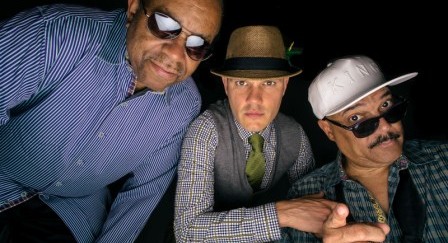 CHOPS ‘N’ SOUL are a new funk super group… though “new” isn’t quite accurate. You see the “chops” part of the band are the Chops Horns – the house horn section for Sugarhill Records who played on countless hits and funk classics.

Lead saxophonist is Darryl Dixon who cut his music al teeth with the Parliament-Funkadelic collective before moving on to work with Grandmaster Flash and The Furious Five, The Sequence, Spoonie Gee and The Sugarhill Gang. From there the Chops Horns went on to play with people like The Police, Alicia Keys, The Rolling Stones, Bob Dylan and Christina Aguilera.

Some while back Dixon and fellow band member David Watson met up with Canadian muso “Soul Joel” Parisien, and so Chops ‘N’ Soul was born. The first fruit from the new band is a tight, funky soul throwback…. ‘Gimme The Grease’. Think the JBs, think Fred Wesley and you’re almost there… that’s how “authentic” the thing is!

Don’t know if there’s an album on the way, but a diligent web search will lead you to this fine track.