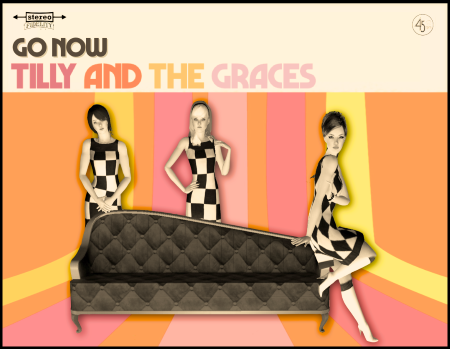 TILLY GRACE is a Brit, blue-eyed soulstress. Over the last few years she’s released some tasty singles like ‘Chill’ and ‘Soul Man Theme’. Both were collaborations with the DSG label and were mixed my mix master Nigel Lowis. Importantly she also released a well-received version of the old Vera Lynn song, ‘We’ll Meet Again’ which was given a sort of Philly makeover. Sounds odd – but it worked and, even more importantly, the revenue and donations that the track earned went to the NHS at the hight of the pandemic.

We’re told that Ms G is working on a soon-to-be released album under the intriguing “Majestic Soul” banner. For her role,  Tilly appears to be performing as TILLY & THE GRACES and you can maybe hear why from the sound of both sides of the album’s first single which pairs ‘Go Now’ with ‘I Ain’t Getting Over You’. Both are new songs (so, it’s not Bessie Banks’ ‘Go Now’) but both tunes have a real 60s girl group flavour which, (probably?) explains the subtle name change. On both, young Tilly sings her socks off ably supported by a femme chorus. Tilly is once again working with Nigel Lowis as producer and between them they create sound that might make you think the music came straight out of the 60s Brill Building. The cover art work reinforces that message. Investigate via DSG Records… https://dsgmusicstore.com/home