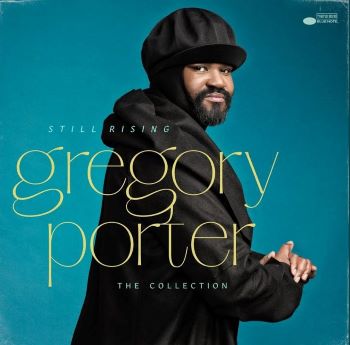 With a sweet synchronicity, soul and jazz giant GREGORY PORTER has just released a new album , ‘Still Rising’, a logical follow up to his wonderful 2020 opus ‘All Rise’. The new collection though is just a little different in as much as it’s not entirely new. The 2 CD, 34 tracker does offer new music, but essentially it’s a beautifully curated collection of some of the Jazz Cat in the Hat’s best tunes alongside a plethora of various duets he’s recorded over the years. But, ‘Still Rising’ isn’t a “greatest hits” set; neither is it a “best of”; rather look on it a box of sonic delights – a great Christmas present for someone close? Porter says of the album: “This is my music up until now, but it’s not a ‘Greatest Hits’. They often come at the end of someone’s career, and I still feel new and young in mine. I have much more to say. There is always something in an artist’s career that people don’t know about; I wanted to bring it to their attention. The album title echoes my last one, ALL RISE, because I am reiterating something evident in my music and the new songs here—this upward-looking optimism about life and love. It’s an unfinished story for me, both musically and personally. And I’m still learning how to do this. Still rising.” So now we know.

The first CD in this collection is Porter out on his own. There are plenty of his best known and more accessible  outings amongst the selected 18 tracks, things like ‘Hey Laura’, ‘1960 What?’, ‘Concorde’ and the still miraculous  tear- jerker ‘If Love Is Overrated’. Amongst the new material is ‘Dry Bones’ which recalls Porter’s heritage and a cover of Sting’s ‘Love Runs Deeper’ which was recorded live at a Stockholm music festival in 2017. CD 1 also boasts a wonderful version of the Chess blues standard ‘My Babe’ while at the other end of the sonic spectrum there’s ‘Love Runs Deeper’ – the song from this year’s Disney Make A Wish campaign. What brings the unity is THAT remarkable voice.

And though CD 2 is a duets collection, once again it’s Porter’s voice that  dominates. Most of the selections will be familiar to Porter fans but again, as with CD 1, there’s an amazing breadth to the repertoire… I mean Gregory can go from harmonizing with Buddy Holly on ‘Raining In My Heart’ (with the benefits of technology, of course) to funkin’ it up with French soul man Ben L’Oncle Soul on Bill Wither’s ‘Grandma’s Hands. Amongst the highlights are a version of one of Burt Bacharach’s best but least well-known songs, ‘Making Love’ (duettist here is Trijntje Oosterhuis), ‘Right Where You Are’ (with Lizz Wright’) and a wonderful partnering with Nat King Cole on ‘The Girl From Ipanema’.

For something totally different there’s ‘Christmas Prayer’ with Paloma Faith (almost Northern soul!) and while we’re getting festive there’s Porter’s duet with Renée Fleming on ‘Have Yourself A Merry Little Christmas’ and therein is (probably) the raison d’etre for this collection. You can be sure ‘Still Rising’ will be one of this year’s best-selling Christmas albums. It’s bound to find its way into plenty of stockings and though some jazz purists might baulk at the commercialism of the project, it’s a business after all and why shouldn’t everybody have the opportunity to enjoy that magnificent voice on plenty of wonderful, easily accessible material?