GOTTA GET A MESSAGE TO YOU… 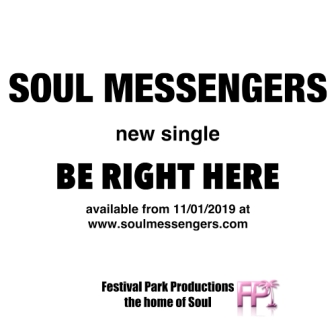 Avid soul sleeve readers will know all about genial UK soul man Steve Lee. He’s one half of ultra popular soul outfit SouLutions whose output has been filling floors everywhere for the last few years!

Now we learn Mr Lee has another music outlet that’s been kept under wraps for a while. With John Anderson, Anthony Keenan and John Walker, Steve works in a band called THE SOUL MESSENGERS and they’ve just launched their first single – a tough, harmony workout ‘Be Right Here’.

The four band members have known and worked with each other off and one for something like 25 years. Between them they’ve been in North East bands like the Distant Voices, Mix, Insight, La Liberte snd the Skiptracers but as THE SOUL MESSENGERS, ‘Be Right Here’ is their first full-on collaboration. And “full on” is a good description of the sound. Clearly the sonic template is “psychedelic” soul Temptations with the lead vocal (supported by big harmonies) switching between bass-baritone and falsetto and though there’s a grumbling, rumbling bass line it needs to be said that the overall production isn’t as lavish as those of Norman Whitfield… how could it be! Interesting nevertheless.

Soul Messengers – ‘Be Right Here’- Out Now on Festival Park.