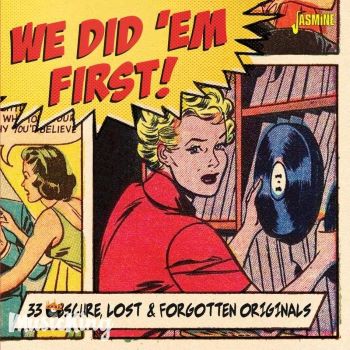 Archive reissue label, Jasmine’s current schedule features three compilations  aimed fairly and squarely at music anoraks, collectors and nostalgia seekers. First up there’s a 33-track retrospective of the work of top UK session guitarist BIG JIM SULLIVAN. The collection’s called ‘Trambone’ (named for one the big hits he played on)  and it features most of the big names from the Brit pop world of the 50s and 60s… people like Marty Wilde, Adam Faith and dear old Cliff! Sullivan added beef and  bite to many of their recordings. Interestingly, Sullivan also featured on Alex Korner’s debut album, ‘R&B From The Marquee’ and from that album, here you can enjoy ‘Gotta Move’. Jim could do blues with the best of them. Evertonians will be thrilled to know that Jim also played on the Johnny Keating  recording of ‘Theme To Z Cars’ – the tune that the Toffees run on to the pitch to. It’s included!

If you weren’t around in the early 60s it’s impossible to understand the cultural impact of the Twist novelty dance. It was, of course, popularised by Chubby Checker  though the original “twister” was Hank Ballard. The dance was a worldwide phenomenon, and the Brits took it to their hearts more than most and  the UK record companies fed the demand with countless  twist associated records. Jasmine’s ‘C’mon Let’s Do The British Twist’ chronicles 35 of ‘em and amongst the artists exhorting us to try some kind of twist are Kenny Lynch and Duffy Power who was, later, to become a mainstay of the British blues revival.

The third new Jasmine collection is probably the most appealing to collectors. ‘We Did ‘Em First’ is self-explanatory. Yep, it offers the original versions of 33 songs that  became later hits in  better known versions. It’s full of intrigue and surprises. For instance, how many soul fans knew that James Brown’s ‘I Got You’ wasn’t the original version? That honour’s down to the redoubtable Yvonne Fair. The Godfather wrote the song, arranged and produced it for his backing singer but, called ‘I Found You’, it meant little till he resurrected it himself. The album also boasts the very first version of ‘Twist And Shout’. Produced by Phil Spector and credited to The Top Notes (a studio band that featured King Curtis), this ‘Twist And Shout’ is very different to the Isleys’ take (and by extension, the Beatles). Amongst the soul tunes included are Don Covay’s  ‘Pony Time’ ( a hit for Chubby Checker) and Gil Hamilton’s ‘Tell Him (Her)’ (better known by the Exciters). There are plenty of pop surprises too. For instance, who knew that Jerry Lee Lewis’ R&R staple, ‘Whole Lotta Shakin’ Goin’ On’ was originally recorded by Big Maybelle – just one of many anorak-fuelling insights on ‘We Did ‘Em First’.