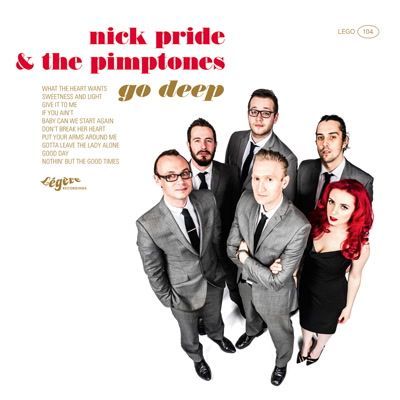 Newcastle’s Nick Pride and his wonderfully named Pimptones won lots of friends with their 2014 ‘Rejuiced Phat Shake’ long player. Released on the Legere label it was stuffed with the outfit’s take on retro soul and good old fashioned funk. Busy, bustling and brassy, the band crafted plenty of tight grooves for singer Beth Macari to wail and warble over in old school style.

The Pimptones have now launched a follow-up… ‘Go Deep’, and their philosophy seems to be if it works don’t fix it ‘cos the 10 tracker takes off where the previous platter left off. So expect plenty of raw funk, like ‘Give It To Me’, ‘If You Ain’t’ and the instrumental ‘Nothing But The Good Times’ which harks right back to the Pimptones’ original sound.

If you like melancholy then there’s a couple of tortured ballads but the album’s best moments are the lightest… ‘Good Day’ and ‘Baby Can We Start Again’. The former is a 60s style sweet floater – a bit like stuff from the Scepter/Wand stable while ‘Baby Can We Start Again’ boasts a lovely melody and some tight (though never frantic) beats… the Northern crew could do worse than check this one out. On both Ms Macari excels while Nick and the boys offer sympathetic support.