GOING BACK TO MY ROOTS… 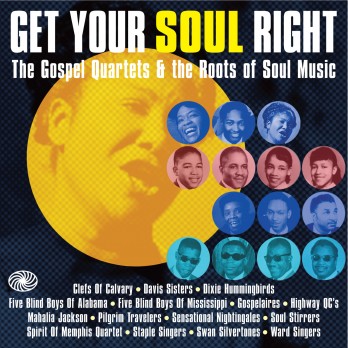 All proper soul fans and collectors know the debt that soul music owes to Gospel. Most of the great soul singers spent their formative years in the Church and many (like the great SAM COOKE) were Gospel superstars long before they enjoyed secular success. If there was ever any doubt about that single fact, then a brand new triple CD collection from FANTASTIC VOYAGE RECORDS nails the point.

‘Get Your Soul Right’ features a massive 90 tracks from the Golden Age of Gospel – the 1950s. In that era countless Gospel groups and soloists traversed the States in Church based music shows called “The Programs”. Performing mainly in sell-out, local store front churches and the occasional theatre, the shows became roof–raising affairs with the male vocal grousp usually being the bill toppers. Oddly those vocals groups were always referred to as “Quartets” even though they often numbered more than four!

‘Get Your Soul Right’ features many of those great “Quartets” – THE DIXIE HUMMINGBIRDS, THE BLIND BOYS OF ALABAMA, THE GOSPELAIRES, THE NIGHTINGALES and their female counterparts – THE WARD SINGERS and THE DAVIS SISTERS. Also featured are the legendary SOUL STIRRERS whose members at various times included SAM COOKE, JOHNNIE TAYLOR and LOU RAWLS. There’s also a selection of tracks from the Queen of Gospel, MAHALIA JACKSON and input from THE STAPLE SINGERS – a group who successfully made that transition into the secular arena.

The collection’s been complied and annotated by soul specialist CLIVE RICHARDSON and the pack’s a must for all serious students of proper soul music.

GET YOUR SOUL RIGHT is out now on FANTASTIC VOYAGE RECORDS.