GOIN’ UP THE COUNTRY… 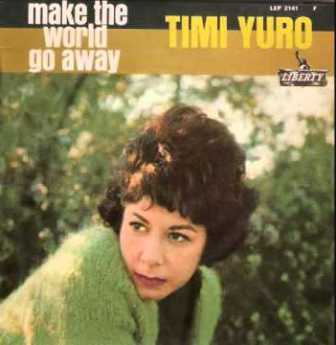 In 1962 Ray Charles released his ground breaking ‘Modern Sounds In Country And Western’ album and in its successful wake plenty of other singers (across different genres) trod the path to Nashville to try to emulate the Uncle Ray magic. One such was TIMI YURO…. the big-voiced Chicago singer who’d emerged in 1961 with an emotion-tingling version of Roy Hamilton’s ‘Hurt’… a “blue-eyed” soul classic long before the term had ever been used.

A then aspiring country singer/songwriter called Willie Nelson was the catalyst for Timi’s “country collection”, ‘Make The World Go Away’. Indeed Nelson furnished two songs on the 1963 12 tracker – ‘Permanently Lonely (a classic in the Willie Nelson canon) and ‘Are You Sure’ which owes more than a little to Ray Charles’ ‘Take These Chains From My Heart.

Apart from the Hank Cochran-penned title track, other highlights included ‘A Legend In My Own Time’ and the opener, ‘Leavin’ On Your Mind’ – as perfect an aural definition of tear-jerkin’ country soul as you could ever get.

That 1963 ‘Make The World Go Away’ LP has, surprisingly, never been released on CD. Australia’s Playback Records has just reissued the album and apart for the original 12 tracks, the collection boasts 13 bonus cuts – chiefly contemporary outtakes and non-LP singles. They include Timi’s definitive reading of ‘Pretend’, a soulful take on ‘Down In The Valley’ and two more Willie Nelson songs. As a measure of Ms Yuro’s soulful delivery try the oddity of ‘He’ll Be Coming Round The Mountain’ (yes, that song!)… little wonder she was respected by such music luminaries as Burt Bacharach and Quincy Jones and of course is now revered by a huge coterie of adoring fans who’ll be delighted that this album is now readily available again.

TIMI YURO’S ‘Make The World Go Away’ is out now on Playback Records and comes complete with extensive essay from Mike Iannarelli and lashings of archive pictures.