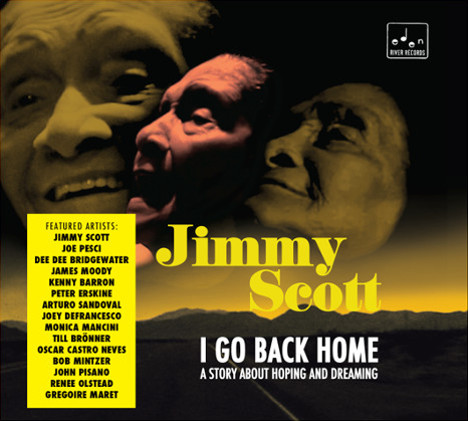 “Unique” is an adjective bandied about all too easily these days. Its overuse in music circles has devalued its meaning, so much so that today even average copyists get to enjoy the epithet!

However one singer who was truly “unique” was veteran jazz man “LITTLE” JIMMY SCOTT. Born in 1925, Scott was often described as “the world’s greatest jazz singer nobody ever heard of”! Those who had/have heard him will tell you that he had a unique (yes, that word again) ability to express a song’s emotion and soul with a huge sensitivity and personal humility. Jimmy’s skill and art, sadly, derived from a genetic medical condition, Kallman Syndrome, which meant that even as an adult he would be short of stature and, as a singer, his voice would forever be the voice of an adolescent.

Jimmy Scott began his music career in the 50s working with legends like Charlie Parker and Billie Holiday but it wasn’t until 1991 that he began to enjoy any real recognition. In that year Lou Reed and Seymour Stein heard him sing at the funeral of Doc Pomus and arranged to have him record and play at more prestigious venues. A renaissance of sorts, but Jimmy was still only revered by a coterie of jazz connoisseurs.

Sadly Jimmy saw out the last years of his life (he died in 2014) in relative obscurity in Las Vegas. However before he passed German record engineer and producer Ralf Kemper (a huge Scott fan) decided to document his life with a documentary film and new album. The movie, ‘Jimmy Scott: I Go Back Home’ received only a limited release but the album has now won release on Eden River Records.

The 12 tracker is a “duet” album that sees Scott working with people like Joe Pesci, Monica Mancini, Arturo Sandaval, Dee Dee Bridgewater and James Moody. The repertoire is drawn from the great American songbook and though the songs may be familiar, be sure that Jimmy Scott’s treatment of them is truly unique!