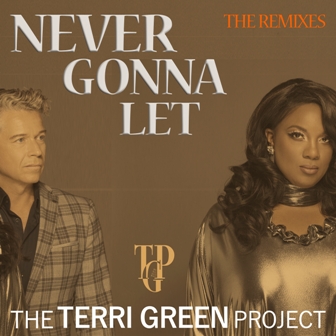 Last year modern soul fans were delighted by the music coming from the THE TERRI GREEN PROJECT. Essentially a duo – Euro muso, Toddi Reed (real name Torsten Abrolat) and Washington born soul diva Terri Green – their LP, ‘What A Feeling’ was on everyone’s year best of listings. Two cuts from the album… ‘Night To Remember’ and ‘Giving It Up’… were, in various mixes, played out all over and achieved credible chart ratings.

Now a third album track has been lifted as a single. It’s the pop/soul confection that is ‘Never Gonna Let’. In its original album mix the cut has a kind of catchy Real Thing feel. No bad thing really, but the new mixes make the most of Terri’s gospel reared vocal to create some ab fab modern soul.  The mixes come from the aforementioned Toddi Reed and UK mixer Frank Star and there’s not a lot to choose between them… all recommended.

We’re told that Ms Green is working on new material with Cornell Carter and Randy Hall but in the meantime, the ‘Never Gonna Let’ mixes will be available from May 15th on Reverb Records.