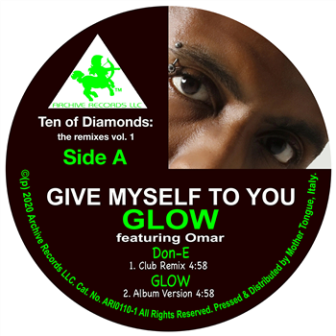 Earlier this year we highlighted an album attributed to GLOW. The set, ‘Ten Of Diamonds’ was actually a various artists LP – with GLOW being the acronym for GIFTED LEAGUE OF WRITERS. The project was led by Dawn McGhee who paired some new songs with some special artists and amongst the album high spots was Omar with ‘Give Myself To You’. Now Omar has a unique sound and the track was typically him – a neo soul meander with considerable appeal.

The tune has just been released as a vinyl single in some new, special mixes. First up Don E puts his beatdown spin on things and then for those who like things a little faster, DJ Spinna adds his own magic, taking ‘Give Myself To You’ towards soulful house territory. He calls it a “Galactic Soul Mix” and he wisely keeps Omar’s lovely vocal way out front. Out now.