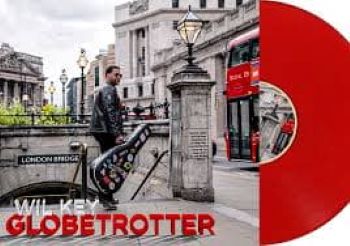 Over the past few months we’ve enjoyed some clever and classy modern soul  from indie soul man WIL KEY.  He impressed back in April with his ‘Another Day in Paradise’ – not the Phil Collins’s song; rather a Key original that dealt with broken dreams and unfulfilled visions among creatives in the Los Angeles music scene of which he himself  is a part. Then earlier this month  we enjoyed ‘G.L.O’ (Good Love Overture)’ .

We learned that both tunes were taken form Mr K’s album, ‘Globetrotter: Side B’ which has just been officially released. The LP’s title  comes from the fact that the music was recorded in all kinds of different locations.

The album is the follow up to Wil’s 2018 ‘Globetrotter: Side A’ which slipped under our radar back then. Indeed ‘Side B’ seems to be the artist’s fifth solo album. It features 15 brand new songs and over 40 musicians and artists from around the globe including vocalist- Sy Smith, bassist Andrew Gouche (Prince, Chaka Khan), Bubby Lewis, Tori Ruffin (The Time) and Angie Swan (David Byrne of the Talking Heads)

‘Another Day in Paradise’ and ‘G.L.O’ (Good Love Overture)’ (which is actually the fourth track, not the opener) still sound good. Other noteworthy cuts include ‘Sho’ Nuff’ which features André Vasconcellos and the 80s sounding ‘Mahogany’ which features Ara Olamuyiwa.

WIL KEY: ‘Globetrotter: Side B’ out now