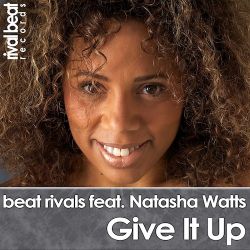 ‘Give It Up’ is the new, soulfully energized single from the BEAT RIVALS. The duo is Krazy K and Soulshy – both well respected in the soulful house community. In 2014 they launched their own Rival Beat Records label and in the three years since they’ve released discs on people like Lifford, Angie Brown, Michele Chiavarini , Phillip Ramirez and the wonderful Ms Natasha Watts.

And it’s Natasha who fronts ‘Give It Up’ offering her usual committed and soulful vocals. Adding even more class to the cut are bassist Ernie McKone and keyboardist Mike Patto.

We’re told the tune will come in main vocal mix and the usual instrumental.

‘Give It Up’ will be released on Traxsource promo on 12th August / Full Release 21st August 2017 on Rival Beat Records.