GIVE IT ALL YOU GOT! 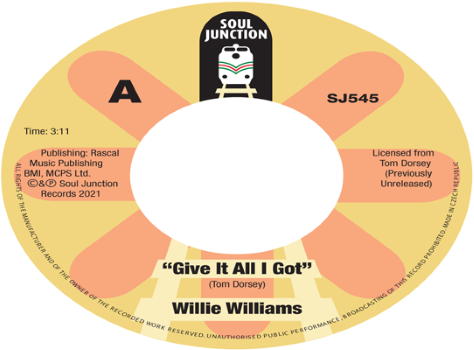 Latest single from ever-dependable SOUL JUNCTION RECORDS pairs two previously unreleased tracks from blind Chicago soul singer WILLIE WILLIAMS. Willie, now passed away, was one of soul’s great unknowns but if we tell you that legendary Impressions’ producer Johnny Pate and the Imps’ manager Eddie Thomas were involved in his career, you’ll know were talking about a real talent! Indeed Willie is sometimes known as Willie “Soul” Williams!

Pate got to work with Willie Williams via his colleague Tom Dorsey, a Chicago songwriter and member of the Trends vocal group. Pate and Dorsey worked with Willie on a number of ABC and RCA singles. None were particularly successful but Dorsey was convinced that Williams had something special and in December 1970 he took his protégé into the RCA studios and cut four tracks. Two of ‘em (‘Must Mean Love (The Baa Baa Song)’ and ‘Psyched Out’ ) were licensed to Eddie Thomas who issued them on his Lakeside label.

The two other songs remained in the can – till now! Soul Junction have just  entered into a special agreement with Tom Dorsey  to release the two 1970 tunes and ‘Give It All I Got’ b/w ‘Do You Understand’ will be good to go on Soul Junction 7” at the end of September.

The A side ‘Give It All I Got’ is a sweet slice of classic Chicago soul – a lovely, laid back groove with superb harmonies. The putative B side, ‘Do You Understand’ is different altogether. It’s a tougher sound. Almost funky, it has a touch of psycho-soul about it without the usual overblown Norman Whitfield excesses.

Interestingly after the 1970 sessions, both Williams and Dorsey turned their backs on music. Williams won a doctorate and became a college lecturer while  Dorsey became a noted photographer. But their work together back in 1970 is a wonderful testament to their musical talents.

‘Give It All I Got’ b/w ‘Do You Understand’ is released on 7” via Soul Junction. Find out more @ http://www.souljunctionrecords.co.uk/