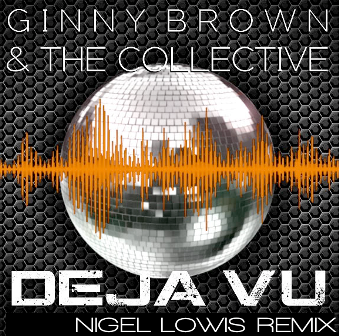 It was only a couple of weeks ago when we pointed you to a poppy, little dancer, ‘Déjà Vu’ from GINNY BROWN and the COLLECTIVE. Since then we’ve learned that Ms Brown and her six piece band operate in and around the Mansfield area and are a popular attraction at wedding and other such functions. We’re told they regularly fill party floors with their take on pop, disco and soul and their ‘Deja Vu’ certainly bears that out… it’s a bright, beaty, optimistic old fashioned sound that harks back to the days of mainstream disco. A sure floor filler after the cake’s been cut and the drinks have been well-coiffed.

Ginny’s ‘Déjà Vu’ has now resurfaced in two new mixes from mix man of the moment, Nigel Lowis. First up there’s the self-explanatory “Disco Mix”, then there’s the more interesting “Soul City Dub” with a booming bass line and a (obviously) a more soulful feel but still plenty of disco garnish…. pay your money take your choice.