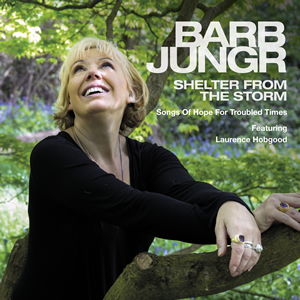 The album offers three original songs alongside covers of Rodgers and Hammerstein’s ‘Bali Hai’, Leonard Cohen’s ‘Sisters Of Mercy’, Sondheim’s ‘Something’s Coming’, Joni Mitchell’s ‘Woodstock’, Bowie’s ‘Life On Mars’ and two from Bob Dylan – ‘All Along The Watchtower’ and ‘Shelter From The Strom’ – from which the album takes its overall title. As always Ms Jungr interprets the songs in her own special way.

Barb and Laurence will be launching the album via an 11 date UK Spring tour which includes four nights at Soho’s Piazza Express. Find full details @ www.barbjungr.co.uk