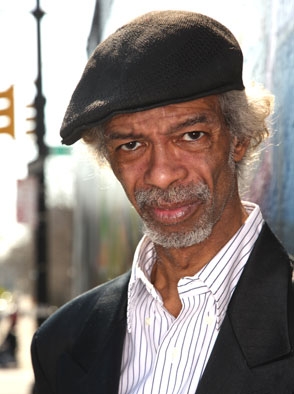 GIL SCOTT-HERON has died. He was 62. His friend DORIS NOLAN said that he died in St Luke’s Hospital, New York on Friday May 29th… the cause of death is not clear but he is believed to have become ill after returning from a visit to Europe to promote his most recent album.

Born in Chicago in 1949, HERON was acknowledged as one of the founders of Hip-Hop and Rap – an accolade he never quite agreed with. He was brought up in Tennessee by his grandmother (his father had been the first black footballer to play in the British leagues… playing for Glasgow Celtic) but, aged 13, he relocated to New York where – even at a young age – he became more and more politicised and he developed a musical format which allowed him to express his political views. He dubbed his style (a brooding mix of minimalist percussion a and poetry) ‘bluesology’ and described himself as a ‘bluesician’.

In his music SCOTT-HERON revealed his deep interest in justice and civil rights, and the shortcomings of the consumer society of the 1970s and 80s. He was also outspoken about the development of nuclear technology. His most famous album was 1970’s ‘The Revolution Will Not Be Televised’ which was a look at the treatment of racial issues in the age of mass media. SCOTT- HERON was also among the first artists to use his music to attack apartheid in South Africa, long before the issue became the focus of a popular global campaign. SCOTT- HERON also had a long-running song-writing partnership with pianist and flautist BRIAN JACKSON, who he met at Lincoln University.

UK poet LEMM SISSAY, a friend of SCOTT-HERON’S who produced a documentary on his work, told the BBC he was “a polymath” who “spoke crucially of the issues of his people. In the late 60s and early 70s, black poets were the news-givers, because their stories were not covered in truth in the mainstream media”.

In recent years, though GIL was forced to deal with his own personal demons. Throughout his adulthood he’d been troubled with an addiction to cocaine, which took him in and out of various legal institutions, and he was also diagnosed as being HIV positive.

Last year, he returned to the studio, releasing ‘I’m New Here’, which was his first new studio release in 16 years, but also, sadly, the album became his swansong.

GIL SCOTT-HERON’S true legacy will be the articulation of the Black politic in the 70s and 80s. One of his most quoted mantras was – “If the right of free speech is truly what it’s supposed to be, then anything you say is alright” …. apposite then, and even more so now