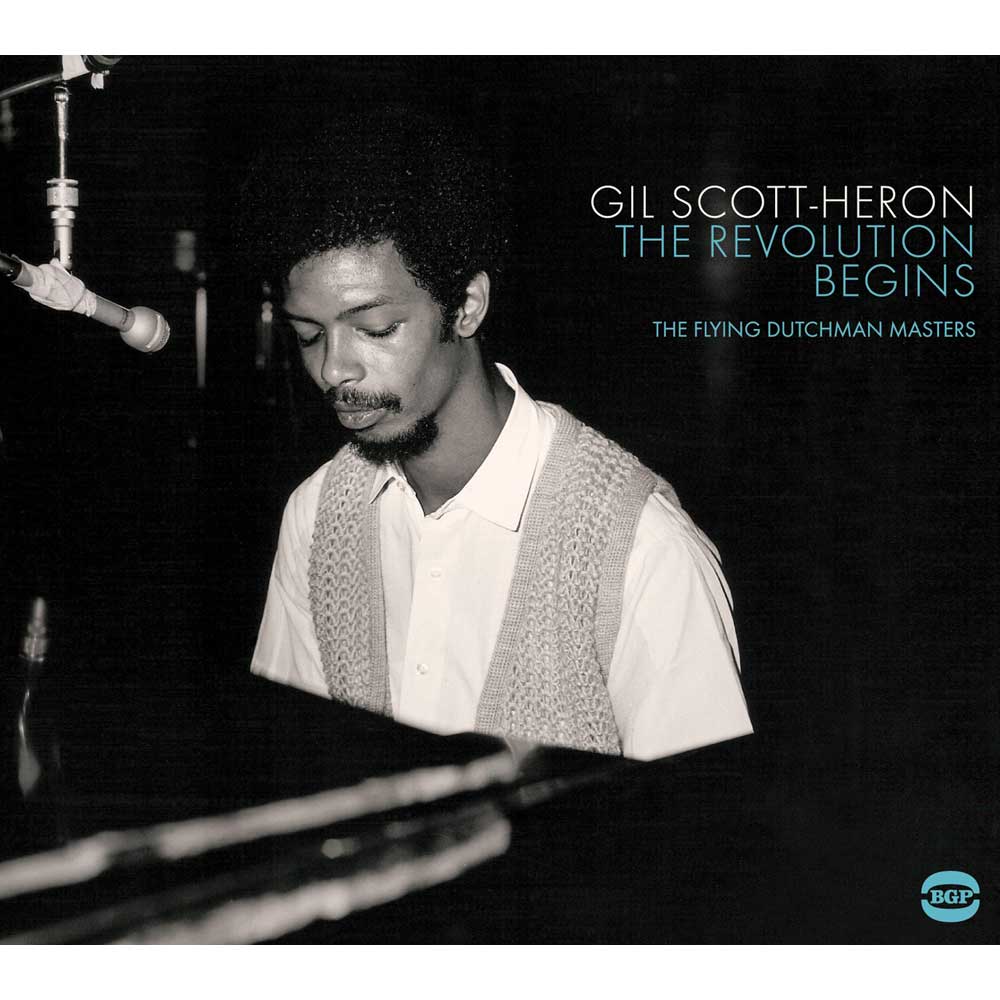 In 2010 the great GIL SCOTT-HERON made a comeback of sorts. His XL album ‘I’m Here Now’ was embraced by the chattering classes and the broadsheet brigade. As is often the way, those said chatterers had previously ignored SCOTT-HERON throughout his long and productive career. Real music fans though knew all about him. They knew the Chicago-born poet/performer had cut some of the most committed and profound recordings of the second half of the 20th century – though, predictably maybe, none had been hits. They knew all about his 80s Arista output; they knew all about his work for Strata East; and they revered the three recordings he made for Bob Thiele’s Flying Dutchman label. Those three Flying Dutchman LPs have just been reissued by Ace/BGP (along with a number of bonuses) in a box set called, appropriately, ‘The Revolution Begins’.

The music – ranged over 3CDs – covers everything GIL recorded with THIELE. The first CD focuses on HERON’S second Flying Dutchman album – the magnificent ‘Pieces Of a Man’ which features an awesome opening quartet of songs – ‘Lady Day And John Coltrane’, ‘Home Is Where The Hatred Is’, ‘Save The Children’ and ‘The Revolution Will Not Be Televised’. If he’d written and recorded nothing else, those four songs would have ensured SCOTT-HERON a place in Black Music’s Pantheon. The album’s title song – a classic study of human breakdown through outside circumstances – is a classic too.

This collection’s second CD includes all of SCOTT-HERON’S poetry, jazz and blues – essentially his first album ‘Small Talk At 125th And Lennox’ –a recording of his poetry book of the same name; the third CD offers an alternative version of his 1972 LP, ‘Free Will’ – the man’s most poetical album – which contains the stirring anti-Vietnam song ‘Did You Hear What They Said’.

Amongst the bonuses is HERON’S vocal on PRETTY PURDIE (Bernard Purdie) and the PLAYBOYS’ ‘Artificialness’ making the collection as definitive as it could ever have been.

GIL SCOTT-HERON died in May 2011 and since then most of his Arista and Strata East output has been reissued in one form or another. Here for the first time all his Flying Dutchman material is available in one place – a magnificent tribute to one of Black Music’s major talents and innovators.