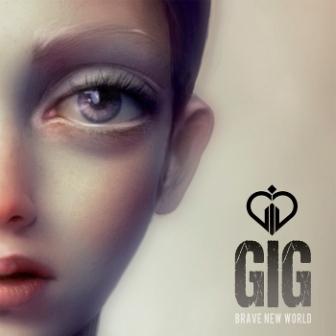 GIG are a new music trio who’ve just debuted with a lovely adult pop confection, the 11 track long player that is ‘Brave New World’. Tagging GIG “new”, though, isn’t quite right since each of the band members boast enviable music biz CVs.

GIG are RANDY GOODRUM, DAVE INNIS and BRUCE GAITSCH – hence GIG! Goodrum is a garlanded song writer – credits include including ‘You Needed Me’ for Anne Murray, ‘Who’s Holding Donna Now’ for El DeBarge, ‘Oh Sherrie’ for Steve Perry and ‘I’ll Be Over You’ for Toto. He’s also collaborated with Jay Graydon as J&R. Innis was founder member of country pop band Restless Heart and has written for, amongst others, the Pointer Sisters while Gaitsch has worked with people like Chicago, Celine Dion, Elton John, Amy Grant and Peter Cetera. He also co-authored Madonna’s ‘ ‘La Isla Bonita’.

The soundscape across the 11 tracker is classy, adult pop. For sure, there’s a classic harmonic West Coast vibe (in the manner of say James Taylor, Toto and America) – but there’s also a garnish of blue –eyed soul – think Hall and Oates and England Dan and John Ford Coley.

Stand out track is the Hammond-led ballad ‘All I’ll Ever Need’. It’s actually the LP’s oddity in as much as it wasn’t written by GIG. The song was penned in the early nineties by composer and keyboardist Michael Haddad, who demoed it with lead vocals by the late Warren Wiebe . GIG recorded a whole new backing track behind the original vocal and the end result is a quite beautiful soft rock/blue eyed soul ballad. Also of note are the Latin-tinged ‘Hernando’s Paradise’ and the intriguing title track which seems to take Bowie’s ‘Space Oddity’ as its source. But dip in anywhere and you’ll enjoy polished, adult pop with each track offering novella style story lines.