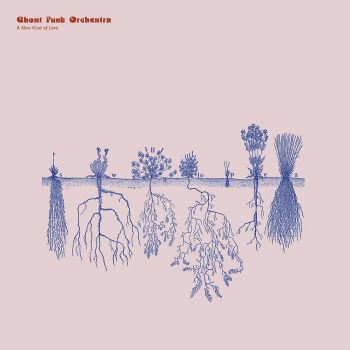 GHOST FUNK ORCHESTRA are one of the Colemine label’s flagship bands. They are  the  brainchild of composer/multi-instrumentalist SETH APPLEBAUM who now marshals a ten piece and who also refuses to put his outfit into a pigeon hole. For sure their music is a heady, mixed bag – hear all sorts of everything… soul, psych rock, salsa, funk, soundtracks, jazz and beyond. A recent blog (Post-Trash) described the band’s sound as “a psych odyssey of traditional sounds delivered in a non-traditional fashion”. See how apt that is by investigating the Orchestra’s latest album ‘A New Kind Of Love’   which was heralded by the single, ‘Why?’, a stripped down, sparse outing with an other worldly vocal from newcomer Christine Chanel.

‘Why?’ could have come from an experimental, art house movie and that’s the overriding flavour of the 12 tracker. Indeed the album opens with an introduction that asks us to take our seats, adjust our listening devices and enjoy! Almost Pearl and Dean if you’re old enough to remember! If you’re of that certain vintage the music works of David Axelrod might be a good reference point too. The music on ‘A New Kind Of Love’ is dreamy and in places  disturbing – but not disturbing enough for Jazz FM to champion it. File under “intriguing ” and “interesting”.