GETTING TO KNOW YOU…. 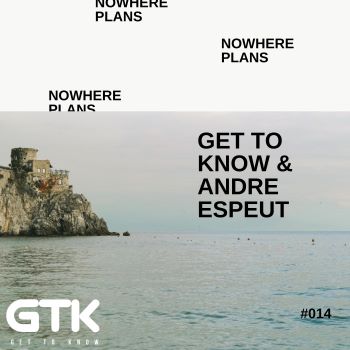 ‘Nowhere Plans’ is the latest single from GET TO KNOW (aka Larry Holcombe). For this laid-back, down-tempo contemporary soul groove, Larry is  joined by vocalist ANDRE ESPEUT.

The back story here is interesting. It all started when Larry was the victim of an armed robbery whilst studying for a Biology and French degree in the South of France. The insurance money was used to pay for a basic studio setup leading to various music projects eventually which took Larry all over the world from Minsk to Mumbai culminating in a peak Friday night slot at Glastonbury’s Shangri-La stage. After time though he became a little disillusioned and turned to studio engineering, producing and mastering – chiefly with Cr2 Records.

However, after another Glastonbury, Larry was again making music of his own , he says: “trying to join the dots between my love of Disco, Soul and Boogie”. The result was the evolution of Get To Know and a series of well received releases on labels like Kitsune, Virgin/EMI, Love and Other and Warner.

Larry’s ‘Nowhere Plans’ is set for release on November 18th via Future Sound of Then  and its cool, other-worldly vibe shows exactly where Get To Know  is right now – a clever but unobtrusive production perfectly matched to Andre Espeut’s inspired vocal.

Tags: Get To KNow