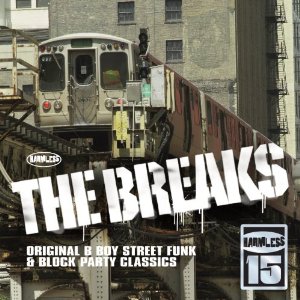 Time was when hardly a month went by without the release of a soul/jazz/funk compilation stuffed with tunes whose breaks had been sampled to death by the hip-hop generation. In recent years they seem to have dried up, but if you’re having withdrawal symptoms then check out the new Harmless 2CD set – ‘The Breaks’. Compiled by DEAN RUDLAND as part of the label’s fifteenth anniversary celebrations, it’s claimed that each and every one of the set’s generous 31 tracks has at some time been sampled by the b-boys and the rappers.

Included on the album are classics like ‘The Champ’ from THE MOHAWKS, ‘It’s A New Day’ by THE SKULL SNAPS and CYMANDE’S ‘Bra’ and ‘The Message’. But with music from (amongst) others like AL GREEN, THE AVERAGE WHITE BAND, THE FIVE STAIRSTEPS, MFSB, JEAN PLUM , HAROLD MELVIN and the BLUE NOTES, INSTANT FUNK and WILLIE MITCHELL (check his gorgeous version of THE YOUNG RASCALS’ ‘Groovin”) it’s essentially a lovely little soul compilation. Even rarity collectors will find plenty to interest them – notably TAANA GARDNER’S ‘Heartbeat’ and LIQUID LIQUID’S ‘Cavern’ – the source of GRANDMASTER MELLE MEL’S ‘ White Lines’, by the way.

THE BREAKS is released on HARMLESS RECORDS on MARCH 28th