GETTING BACK TOGETHER AGAIN! 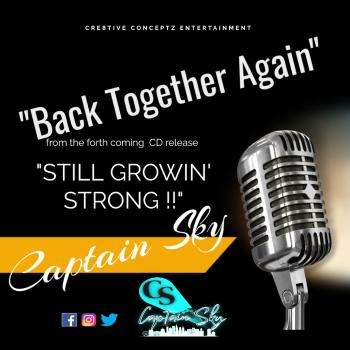 CAPTAIN SKY is the musical alter ego of Chicago soul/funkster singer/bassist Daryl Cameron and the good captain’s been on the scene for a good while. Latterly; he’s enjoyed a  mini renaissance via the singles ‘Under Tha’ N-Fluence’ and his lovely cover of Blue Magic’s classic 1973 outing ‘Look Me Up’. Both tracks were taken from our man’s LP, ‘All Of The Above’

The Captain now gets into his 2023 stride with another cover  – a sweet and lovely version of the Roberta Flack/Donny Hathaway classic ‘Back Together Again’. The song’s   been covered plenty of times before (we’re rather partial to the Tony Momrelle/ Chantae Cann take) and Captain Sky stays close to the original template – adding just a few contemporary flourishes. Duetting with the Captain is sweet voiced soulstress, Yvonne Gage, a perfect foil to Mr Cameron. From the art work, (above) it’s obvious that this Back ‘Together Again’ is from an upcoming album. The single’s out now!