GETTING’ A GOOD THING GOIN’…. 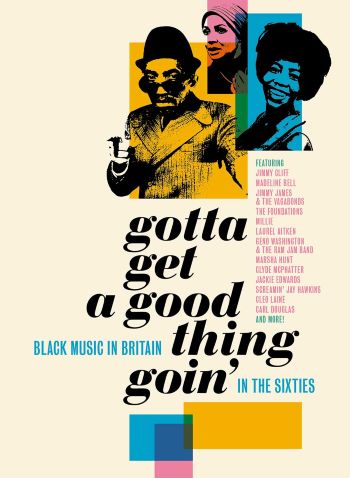 Amongst the latest compilations from Cherry Red/ Strawberry is an unmissable 4 CD, 115 track ‘GOTTA GET A GOOD THING  GOIN’ ON’. The beautifully packaged collection sets out (and succeeds) to right a wrong… that “wrong” being the neglect/lack of awareness of British black music in the 60s. Sadly, for too many, British black music only begins in the late 70s/early 80s when bands like Incognito, Loose Ends, Hi Tension, the Real Thing, Central Line et al started to grab some attention. Connoisseurs, though, know that in the 60s, British black music was just as rewarding as the age of so called “Brit Funk” and “Acid Jazz”. The only difference was that in the 60s, for all kinds of reasons – some rather obvious – British black music was ignored and/or neglected by the mainstream. The irony here being that in the early 60s bands like Beatles and the Stones peddled their own cover version of embryonic soul and blues!

That’s all water under the proverbial, of course, but at least we can now be grateful that with ‘GOTTA GET A GOOD THING  GOIN’ ON’ the record can at least be seen to be starting to be set right! And this collection proves just how vibrant and diverse the British black music scene was in the 60s. That scene was driven by all kinds of factors. First, the UK was enjoying the benefits of having a large Caribbean community who, naturally, had different music tastes to what we might call the “mainstream”; that community relished making  their own music. Then there was the growth of mod culture and it’s thirst for soul. In the early 60s soul was actually hard to find. Few US records won release over here while visits from soul stars were even rarer! One solution was  for Brits to craft their own take on soul and in this  they were helped by the presence of black US servicemen many of whom, after demob, decided to stay here and try their hand at performing  and this collection features a goodly number of them. Blues was popular too and again a number of US blues men made the UK their home in the early 60s. All those factors and more are reflected across the album’s generous 115 tracks!

The set’s four CDs are ordered thematically. The first two discs document the explosion of homegrown Soul and R&B which reflected the  growing success of labels such as Motown, Chess, Stax and Atlantic. So here you can enjoy music from people like Geno Washington and the Ram Jam Band (‘Michael’) (pictured above), Jimmy James and the Vagabonds (‘This Heart Of Mine’) , Madeline Bell (‘Picture Me Gone’) and the Flirtations (‘Nothing But A Heartache’) – all Americans who made their homes and living in the UK – alongside people like Kenny Lynch and the Chants. The Chants, of course, hailed from Liverpool and were the precursors for the Real Thing. The Chants have the distinction of having a band called the Beatles (never heard of  ‘em!) back them during their Cavern shows!

CD 3 is devoted to the homespun Ska, Rocksteady and Reggae from artists like Millie, the Rudies, Rico’s Combo and Laurel Aitken while CD 4 is much more of a mixed bag offering a wide range from blues to MOR, to boogie-woogie to  pop. Why, there’s even a version of the ‘Coronation Street’ theme from the Geoff Love Orchestra! Like we  said, British black music in the 60s was not just vibrant… it was hugely diverse!

‘GOTTA GET A GOOD THING GOIN’ boasts numerous tracks new to CD and includes many which on 45 now command three figure sums on the collectors’ market. With comprehensive sleeve notes, a thoughtful essay from Fitzroy Facey (of ‘Soul Survivors’ web site) and artist biographies, a plethora of rare images and photos and newly remastered sound, this is a fitting homage to a golden era in Black British music