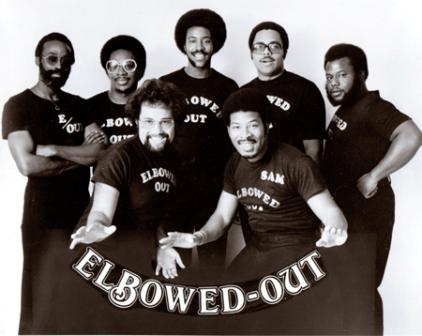 ELBOWED OUT (great name or what?) were a mixed race group who worked out of Seattle. Main men in the band were trumpeter SAM CHAMBLISS and guitarist DENIS WILCOX – who also both shared lead vocals. They started out as a covers band working the local scene but they soon found gigs supporting bands like TOWER OF POWER and the O’JAYS. Then, after 20 years on the road, they disbanded and the septet went their separate ways.

Back in 1978 they made their only two recordings and UK label SOUL JUNCTION has just won the rights to release them. The notional A side is a beautifully, quirky dancer called ‘Taking A Step’. Big and brassy it’s an intoxicating mix of disco and the flavours of TOWER OF POWER, WAYNE HENDERSON and the BLACKBYRDS… listen up to the catchy hook. It’s a magical little tune. The other side is the equally satisfying ‘Girl You Got Magic’. Both feature SAM CHAMBLISS on lead and were produced by BILL MILLER