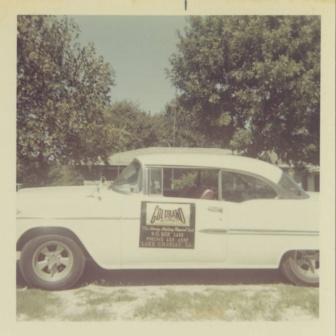 German label TRAMP RECORD’S latest compilation is a treat for collectors of rare, rough and rustic soul and funk. Tramp, you see, have managed to license material from a pair of labels owned my music biz maverick Eddie Shuler – Goldband and ANLA… and Shuler’s story is a great example of the way the American music biz worked at the local level.

Eddie Shuler was born in Wrightsboro, Texas in 1913 but by the early 40s he was working in Lake Charles in Louisiana. There, to supplement his income, he joined a group called The Hackberry Ramblers who played a strange mix of Cajun blues and C&W swing. Eddie then struck out on his own with a band called The Reveliers. In 1945 he formed Goldband Records to record his own group and he took charge of a studio complex in Lake Charles. Soon he diversified into releasing records by other local bands and eventually in 1951, The Reveliers had their own regional hit with ‘Ace of Love’.

The Goldband set up was odd – but typical of many indie, local labels. Shuler’s set up housed a record store and a TV and radio repair business and, as the only studio in the region, it attracted all kinds of aspiring artists across all kinds of genres – including a 14 year old Dolly Parton and of course many hopeful soul and blues singers turned up at Goldband’s door too.

Tramp have collected 23 of the best soul, blues and funk tracks from the Shuler labels for ‘The Funky Side of Goldband/ANLA Records’ and amongst the featured artists are Count Rockin’ Sidney, Chester Randles’ Soul Senders, Freddie Love, Clifton White and Lee Bernard. None of the recordings achieved much more than local success though Shuler did score hits in the Cajun market.

Shuler continued wheeling and dealing till he died in 2005 and like many indie record bosses he founded various other labels to try and win radio plays but Goldband was the longest surviving and the statistic books will tell you that it is America’s longest running indie record label… still going today, with its own online presence.