GETTIN’ BACK TO BUSINESS 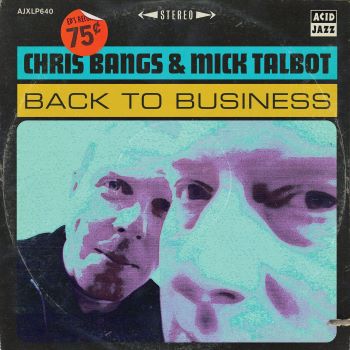 ‘Back To Business’ is a delightful new collaborative album from two vets of the UK soul and mod scene… MICK TALBOT and CHRIS BANGS. Mick is, of course, a garlanded keyboardist who’s played with everyone and anyone but maybe best known in  the mainstream for his key contribution to the Style Council. “Bangsy”, who’s been on the scene for more years than he cares to remember, is an acclaimed DJ/producer/mixer and sometimes percussionist and their ‘Back To Business’ betrays all their years of experience. Apt too that the 12 tracker is being released via Acid Jazz – a label the duo have enjoyed a long relationship with. Indeed Chris actually coined the term ‘acid jazz’ while Mick appeared on one of the label’s earliest and rarest singles as ‘King Truman’ back in 1988.

The upcoming release of ‘Back To Business’ was flagged up by  two singles… ‘Sumthin’ Else’ and a cover of ‘How Sweet It Is (To Be Loved By You)’.The former was/is a 60s flavoured sweaty jazz club groove which went down a storm on Acid Jazz head boy’s Eddie Piller’s Totally Wired Radio show. The single all but selling out that very day.  The latter was/is an  instrumental take on the Marvin Gaye classic and its vibe recalled those great old Earl Van Dyke 60s Motown albums.

And the good news is if that retro soul instrumental and soul-jazz sound is your bag, then there’s plenty more on ‘Back To Business’. Indeed if the LP was presented as some lost 60s Blue Note/Chess album from someone like, say, Brother Jack McDuff, Jimmy Smith or Ramsey Lewis you wouldn’t  blink an eye lid! Yep, ‘Back To Business’ is that good.

The ‘Back To Business’ album will be available on vinyl, CD, digital download and streaming platforms via Acid Jazz from 17th June.