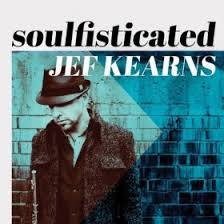 The flute’s never really featured too strongly in soul’s illustrious back pages. Yes… back in the day we all did the ‘Philly Dog’ with Herbie Mann of course, but by and large the flute’s been conspicuous by its absence.

One man is working hard to change that. Canadian JEF KEARNS has been mastering the flute all his life but rather than go down the classical or even jazz road, he’s determined to match his artistry on the instrument with his passion for soul and R&B. While learning the flute, Jef was constantly listening to soul and hip-hop stations – notably those blasting out of Detroit and he’d adapt his playing to what he was hearing.

His career mission statement is clear; “It is my mission to show people that the flute can be just as soulful and won dirty as sax“… judge for yourself as the man’s latest long player, ‘SOULFISTICATED’, hits the sales racks.

The 11 tracker is a pleasing mix of instrumentals and vocals – both up-tempo and more laid back. Interestingly, Kearns’ flute doesn’t dominate proceedings. His tasteful fills are only part of the musical picture he creates and the album’s the better for that. Hear what I mean on the tight little instrumental beater that is ‘Get Down’ but if you prefer things a tad slower try ‘Strange Predictions’ or ‘Don’t Make Me Wait’… decent, if predictable quiet storm moments. Jef show his experimental side though on stuff like ‘Electrified’ – as techno as the title suggests.

That said, I guess it’s the vocals that grab initial attention and ‘Through The Rain’ (featuring Aria Zenula) is the catchiest… a subtle modern soul beater. ‘Make It Real’ ( vocals from Maya Killtron) and ‘Breathe’ (featuring Lisa Michelle) are much more laid back while ‘Saturday’s End’ with Divine Brown shows Kearns’ range with the cut going into broken beat territory. ‘No One Like You’ is different again.. a subtle cross between neo-soul (shades of early Jill Scott) and hip-hop, you’d be hard pressed to convince someone that this a cut on a flute-led album. Like we said… different.