GET ON THE GOOD FOOT! 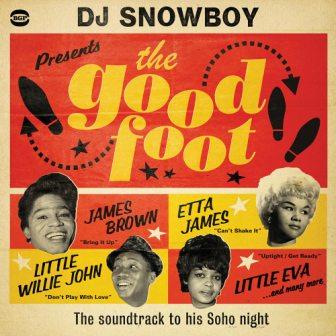 London’s Soho continues to be a focal point for proper old-fashioned soul clubs and currently one of the hottest is Madame Jojo’s where once a week ,wearing his DJ hat, SNOWBOY (Mark Cotgrove) spins proper old fashioned soul to a packed and appreciative audience at the GOOD FOOT club night. At the Good Foot the music is 60’s soul, R&B, Latin and funk and Snowboy mixes the well-known with the less well known and the downright rare.

Ace imprint BGP has just released a wonderful 23 tracker that aims to recreate the sounds of the Good Foot night and it’s stuffed with those magic and special sounds that made you fall in love with soul in the first place.

Amongst the gems on the album are Etta James’ delightful ‘Can’t Shake It’ ( a little known 1964 Chess side), the Brownettes’ ‘Baby Don’t You Know’ ( a James Brown-penned item from 1968), the Contours’ ‘Do The See Saw’ (only released in 2011) and the Shirelles’ ‘Boys’ (which, of course, the Beatles recorded for their first LP)