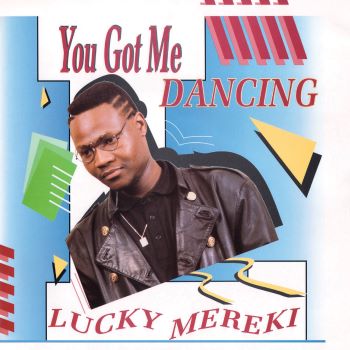 Despite being a “name” in his native South Africa, LUCKY MEREKI is something of an unknown quantity elsewhere. Though he’s still working, his most successful and productive period was the 90s and early 00s when his biggest tune was probably ‘You Got Me Dancing’  – a crisp, electro beater which eventually became popular on the continental bubble gum scene. Easy to hear why – it’s a carefree dance item that reflects the optimism felt in South Africa as it emerged from apartheid.

The tune was the title track on a varied 8 track album that’s just been re-issued by Re:Warm music. ‘You Got Me Dancing’  still has a naïve charm and amongst other electro-fuelled dance items are ‘Your Lips’, ‘For Your Love’ and ‘Action’. But Mereki (a multi-instrumentalist as well as vocalist) knew that variety was important, so ‘You And I’ is a sweet, mid-tempo groove, ‘Lovely Sight’ is laid-back and soothing while  the gospel-slanted ‘We Are One’ is the album’s slow moment.

LUCKY MEREKI; You Got Me Dancing’  pit now via Re:Warm