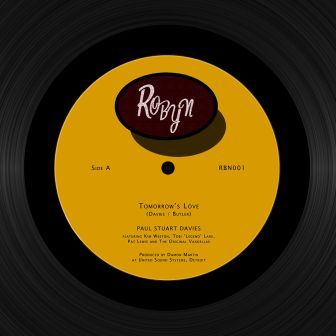 Back in January we highlighted a remake of the Motown classic ‘Do I Love You (Indeed I Do)’ from the NORTHERN SOUL SURVIVORS. Leader of that crew was young Northern connosieur PAUL STUART DAVIES and to help him out he drafted in some of his heroes…. Tommy Hunt, Dean Parrish, Sidney Barnes, Pat Lewis and Motown’s Chris Clark. The single raised a shed load of money for a charity appeal to help Wigan DJ Jon Bates who is now sadly wheel chair based.

The good news, though, is that Paul has gone back into the studio to cut another slice of Northern magic. Mind you this wasn’t any old studio. Mr D travelled over to Detroit to record at United Sound Systems and keen to get an authentic sound, he drafted in a few pals to help him out on BVs. So listen in and hear a couple of original Vandellas, soulstress Pat Lewis, Northern icon Tobi Legend and the great Kim Weston! (All pictured with Paul, below).

Between them they’ve created ‘Tomorrow’s Love’ – an easy-going, rolling slice of retro soul that succeeds in  creating the good-time feel of 60s Northern soul. Paul says: , “Recording ‘Tomorrow’s Love’ has been a bucket-list recording for me. To record in the same Detroit studio as my heroes (Marvin Gaye, Jackie Wilson, Aretha Franklin) and to be backed my legends of the Detroit Soul scene: Kim Weston, Pat Lewis, Tobi Legend and the Original Vandellas has been a dream come true. I hope today’s soul lovers like what we have created in a classic sixties style.”