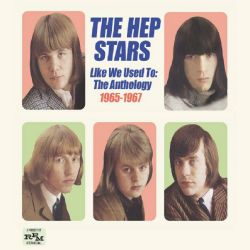 Music archivists will be interested in a new release on RPM Records that charts the career of 60s Swedish beat combo, the HEP STARS. The quintet were active between 1965 and 1967 and like their UK contemporaries their repertoire consisted of covers of US soul and R&R numbers along with a smattering of their own material. In the case of the Hep Stars most of that “own material” was penned by their keyboardist – a certain Benny Anderson, who later, of course, was at the core of Abba! Indeed the collection also boasts an Anderson collaboration with future Abba colleague Bjorn Ulvaeus – and the song, ‘Isn’t It Easy To Say’, is considered a seminal piece in the development of Abba.

The music menu on the 25 tracker is 60s’ beat – albeit with a Scandinavian flavour. Amongst the covers are the Hep Stars’ versions of ‘Farmer John’, ‘Cadillac’ and ‘What’d I Say’. Some of the cuts are live versions and by all accounts the group’s shows were wild affairs – a far cry from the politeness of Abba!

‘The Hep Stars –Like We Used To: The Anthology 1965 – 1967’ is out now and contains a fully illustrated booklet and an interview with the band’s front man Svenne Hedlund.