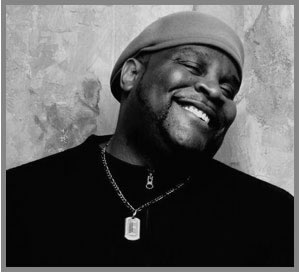 EXTRA RICH IN CLASS (E.R.I.C.) is the performing alter ego of New York soul man ERIC HARRIS. He works the NYC soul circuit where he has a great following. Those fans eagerly await his regular releases, which, rather than full albums, take the form of EPs (extended players) and it was a track from one of his 2011 mini sets that increased his fan base – certainly in Europe and the UK where the ultra-catchy ‘Betcha Didn’t Know’ struck a chord with contemporary soul fans who still hanker after the music of people like Luther Vandross, Bill Withers and Barry White.

The good news for lovers of quality indie soul is that the big man has just released his latest 6 track opus. Boasting great comic strip artwork, ‘Backstage’ comes on like a mini soap opera examining some of the problems involved in starting and maintaining a relationship.

The set kicks off with a quite lovely, lazy retro soul groove called ‘The ATM’. Don’t know too many soul performers who could get away with a song about that little hole in the wall…. but Eric does – and he does it with real style. There’s more soulful panache about ‘My House Your Home’… a flavour of Luther’s ‘Power Of Love’ about this one, while the slow and sweet EP title cut will recall the sadly and much missed Mr. V too. ‘Fall In Love’ is Eric’s homage to Philly style balladry while the tougher ‘The Maze’ touches on issues of addiction. Heavy stuff, but balanced by the set’s closer, ‘Save My Love’ where the inspiration seems to be the song craft of Burt Bacharach.

E.R.I.C.’s ‘Backstage’ EP is worth an investigation. To get flavour of the set, try the lovely ‘The ATM’. Find out more about that tune, the EP and Eric Harris @ www.extrarichinclass.com