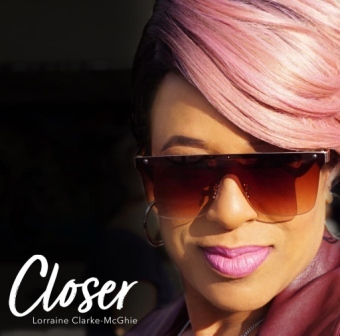 Lorraine Clarke-McGhie is a London based soul singer with an impressive non-music CV! Ms Clarke is a music and French graduate, and is now teaching in a Secondary School. Musically, she’s formed gospel choirs within secondary schools and taken school choirs around Europe. She had been one of the choir leaders of the Camden Schools Choir Music Festival consisting members of over 50 schools performing at the prestigious Royal Albert Hall. Lorraine is also a trained vocal coach and teaches piano in addition to music theory grades. She was also a member of the renowned London Community Gospel Choir. In 2008 Lorraine was the winner of a televised gospel singing competition aired on Love World digital TV channel. She’s also sung in plenty of top venues – like London’s Jazz Café (where she supported Kindred – The Family Soul), the 606 Club and the Royal Albert Hall. WOW!

Now, as a solo singer, Lorraine is striking out on her own with the single ‘Closer’ – a steady, tight 80s sort of groove on which the lady’s gospel background is self evident. Lyrically, the song could be devotional – “getting closer to God” – or secular – “getting closer with your significant other half”. Either way, it’s a striking cut and already winning plenty of soul radio plays!