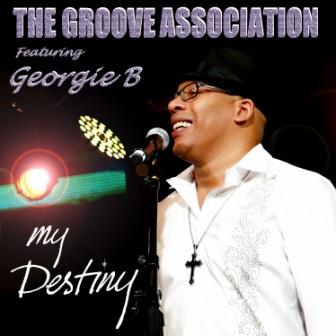 Knowing UK soul fans know all about GEORGE BROMFIELD (Georgie B) and his GROOVE ASSOCIATION. Over the years they’ve released some tasty music and now they return with a very special tune called ‘My Destiny’.

Special? Yes, very much so. In February Georgie suffered a heart attack and spent and a couple of weeks at the Cardiothoracic Hospital in Basildon, Essex. It was quite a scare for Georgie but thanks to the care of the staff, he’s back in business and making great soul music again….. like the Groove Associations’ new single, ‘My Destiny’.

The tune is a contemporary, pulsating but laid-back EWF sort of thing with great vocal interplay and a catchy little riff punctuating affairs . Georgie says: “Obviously someone up there thinks I have some unfinished business down here……I only hope I can do him proud!”

An internet portal will allow you to investigate further and, importantly, Mr. B says that all net profits of this single will be donated to the British Heart Foundation! It’s his way of saying thank you to the doctors, nurses and all the other teams who saved his life.