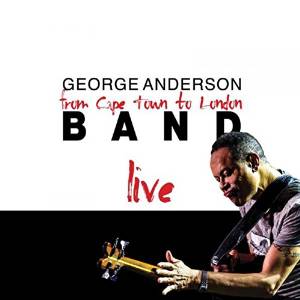 Celebrated British bassist GEORGE ANDERSON leads an unusual dual musical life. He is, of course, best known for his work with smooth jazz icons Shakatak. He’s a key member of the band – on the road and in the studio.

George though also fronts his own band and last year they played a successful series of shows in South Africa. with the climax concert – at Cape Town’s Grand West Arena – recorded for a live album which has just won release.

‘George Anderson Band… From Cape Town To London’ is a an energized 13 tracker with most of the tunes Anderson originals… the two covers being the show’s “encores” – versions of George Duke’s ‘Brazilian Love Affair’ and Luther Vandross’ ‘Never Too Much’. Of the original tunes, ‘Back In The Day’ is particularly strong with a great vocal from Debby Bracknell. Bass fans will also be pleased to know that the set also boasts the obligatory virtuoso bass solo from Anderson.

‘George Anderson Band… From Cape Town To London’ is released on Secret Records on May 11th. Find out more @ www.gabass.co.uk