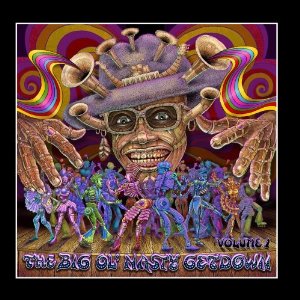 It’s no wonder they’ve been called a funk supergroup – Big Ol’ Nasty Getdown (or BONG as they’re known to their growing army of fans) is comprised of about ninety musicians culled from at least fifty different bands. Led by co-founder, bassist, JOHN HEINTZ, and operating out of Los Angeles, North Carolina and New Orleans, the funk collective includes such luminaries as GEORGE CLINTON and assorted members from legendary bands like Parliament/Funkadelic, Graham Central Station, Kool & The Gang, the Derek Trucks Band, Sun Ra’s Arkestra and Fishbone. The group’s debut album is entitled ‘Volume 1’ and is slated for a release in May. The striking front cover was drawn and designed by Israeli-born artist, Emek Golan, who was responsible for Erykah Badu’s ‘New Amrykah’ album cover and also gained notoriety by designing concert posters for bands like Radiohead and Pearl Jam.

Bassist John Heintz told SJF: “As you can imagine there were many styles colliding at once.  We didn’t put any limitations or expectations on how we wanted the album to sound so we simply let the music flow what ever direction it was moving at the moment. Really there was no telling what was going to happen putting all of those folk together like that in a house for a week, but at the end of it all we are proud of this album.”

The group won an award at the Hollywood Music In Media Awards for their song ‘College Funk’ and intend to tour to support the new album. Said John Heintz: “We are currently working on putting together some tour dates for the end of the summer with a rotating line-up of roughly 20-25 musicians per show. “

Look out for a review of the group’s album nearer the release date at SJF.