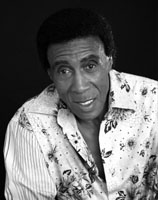 In what’s been a bad week for soul music, it’s been announced that GENERAL NORMAN JOHNSON – charismatic vocalist with the CHAIRMAN OF THE BOARD – died on Wednesday, 13th October. He was 67 and the cause of death has not been released. Current band member KEN KNOX wrote on the CHAIRMAN’S Facebook page, “It saddens me to announce the passing of our friend and hero General Johnson. He held a special place in his heart for each and everyone of you. His music will live on.”

JOHNSON was born in Virginia in May 1943 and made an early start in music when he began singing in Church. His first record deal was with Atlantic, signing with his young group the HUMDINGERS. In 1961 the HUMDINGERS morphed into to THE SHOWMEN, who moved across to Minit Records recording the classic the single ‘It Will Stand’. The band eventually split up in 1968.

JOHNSON then worked solo before joining the Invictus label, where HOLLAND-DOZIER-HOLLAND put him into his career-defining group – THE CHAIRMEN OF THE BOARD. Their debut single, ‘Give Me Just A Little More Time’ was a smash and further successes included ‘(You’ve Got Me) Dangling On A String’ and ‘Everything’s Tuesday’. JOHNSON was also an accomplished songwriter – writing ‘Pay To The Piper’ for the CHAIRMEN. He also wrote the Grammy Award winning ‘Patches’ – recorded most famously by CLARENCE CARTER. Record label mates HONEY CONE recorded the JOHNSON penned tracks ‘Want Ads’, ‘Stick Up’, and ‘One Monkey Don’t Stop No Show’. JOHNSON also wrote ‘ Bring the Boys Home’ for FREDA PAYNE.

As recording success slowed down at Invictus the CHAIRMEN OF THE BOARD were rebranded simply as the CHAIRMEN, then NORMAN went solo recording for Arista. Later different incarnations of the CHAIRMEN made a living on the beach music circuit. In 1993 he released another album, ‘What Goes Around Comes Around’, which also featured fellow Chairperson DANNY WOODS.

In recognition of the contribution that JOHNSON had made to American popular music, the Virginia General Assembly designated June 9, 2001 as GENERAL JOHNSON Day in Virginia. In February this year, NORMAN had knee surgery after complaining of knee pain during a show in Charlotte, a show which turned out to be his last live performance. In September, he had a knee replacement operation, and was recovering when he passed away. GENERAL NORMAN JOHNSON is survived by his wife, Julia, two sons, and a daughter.