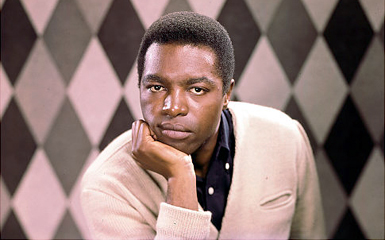 SJF is sad to report the death of legendary soul music singer-songwriter, GENE MCDANIELS, who passed away on 27th July aged 76.

Born in Kansas in 1935 and raised in Omaha, Nebraska, Eugene Booker McDaniels was the son of a preacher and started off his music career singing gospel music in the devotional group, The Echoes Of Joy. In the late ’50s, he moved to the US West Coast and started singing jazz, often with pianist Les McCann and his group.

Under the name Eugene McDaniels, he signed to Liberty Records in 1960 and scored two Top 5 US pop hits with ‘A Hundred Pounds Of Clay‘ and ‘Tower Of Strength‘ in 1961. McDaniels appeared as himself in the Richard Lester-directed 1962 movie, ‘It’s Trad, Dad,’ alongside Acker Bilk, Chubby Checker and Gene Vincent. After studying acting and a brief and fruitless spell at CBS in the mid-’60s, he relocated to Europe for a while, eventually moving back to the USA at the end of that decade when Les McCann and Eddie Harris enjoyed a massive Stateside hit for Atlantic with the McDaniels’ tune ‘Compared To What‘ (taken from the pair’s live ‘Swiss Movement‘ LP). That song’s success (Roberta Flack also recorded it on her debut album, ‘First Take’) resulted in a deal with Atlantic in 1970, which yielded the albums ‘Outlaw‘ (1970) and ‘Headless Heroes Of The Apocalypse‘ (1971), both helmed by the late Joel Dorn. Both records melded soul and jazz with folk and blues and the latter set in particular, with its trenchant political invective, caused controversy, even prompting US Vice President Spiro Agnew to ring Atlantic to complain about the views expressed on ‘Headless Heroes Of The Apocalypse.’ Atlantic panicked and fired McDaniels from the label. Ironically, though, it was Atlantic Records that gave McDaniels his biggest pay check when a song he’d written and produced for Roberta Flack (‘Feel Like Makin’ Love‘) became a million-selling pop and R&B number one in 1974.

McDaniels also penned and produced sides for Gladys Knight & The Pips, Nancy Wilson, Merry Clayton and Melba Moore during the same timeframe and in 1975 he recorded another album under his own name, ‘Natural Juices,’ for Lou Adler’s Ode label.

After lying low for most of the ’80s, in the 1990s McDaniels wrote and produced ‘Meet Me On The Moon‘ for Phyllis Hyman and worked with singer, Carri Coltrane. In 2004, he released his final album, ‘Screams & Whispers.’ For the last decade of his life or so he lived in Kittery Point, Maine, writing music and working on movie screenplays.