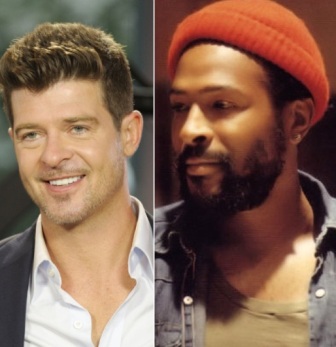 American music litigation continues apace as the family of MARVIN GAYE lock legal horns with ROBIN THICKE. US news agencies report that Gaye’s children, Frankie and Nona are suing the blue-eyed soulster for plagiarising their father’s classic ‘Got To Give It Up’ on his ‘Blurred Lines’ summer chart topper.

Thicke strenuously denies the allegation though, interestingly, he has took out a “pre-emptive” lawsuit to fend off any allegations of plagiarism. Back in the summer he admitted in interviews that ‘Got To Give It Up’ inspired ‘Blurred Lines’ but he insists that he and his producer Pharrell Williams –though knowing all about ‘Got To Give It Up’ – put their hit together in a just half an hour.

However, in a subsequent interview young Robin denied that Gaye had ever influenced him! For their part the Gaye family are citing dozens of eminent musicologists and critics who’ve drawn comparisons between the two songs.

Thicke’s lawyer simply said, “Whether or not plaintiffs are fans of Marvin Gaye is irrelevant; no infringement occurred here”. Another one to watch, we think!